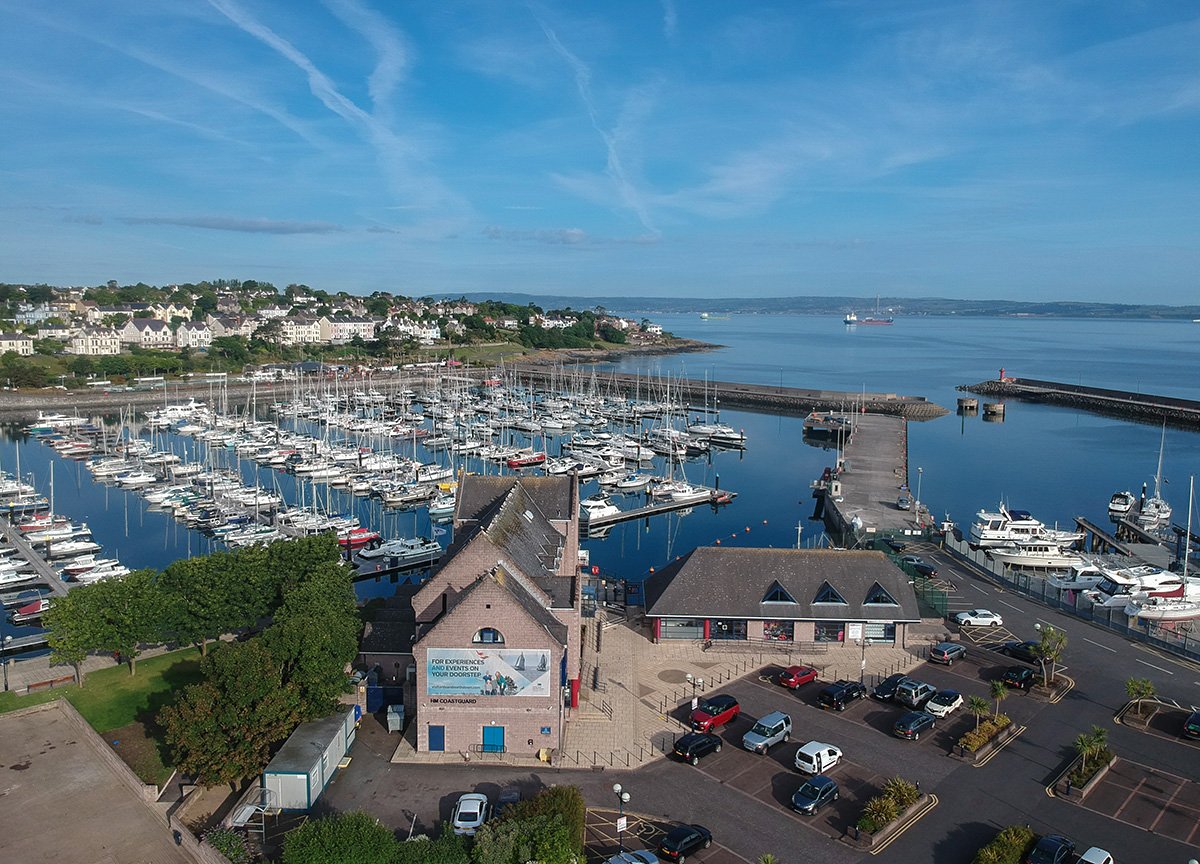 Bangor Seafront is often known as the ‘Queen’s Parade’, although this has become more of a swear word of late, due to failing investments in the shopping side of the seafront. Where plans for redevelopment continually fall through to the seemingly endless frustrations of local Bangor folk. But this has very little to do with the seaward side of Bangor seafront, or to visitors and tourists to Bangor, as the seaside attractions will always be the main draw to the town. Anyway, to reach the seafront (when not arriving by boat) it is less than a 500-meter walk from Bangor Bus and Bangor Train Station, following the decorative sails down Main Street, to reach McKee Clock which overlooks Bangor Marina.

Bangor Marina is conveniently located along the Irish Sea cruising routes, where with 560 secure sheltered pontoon berths, it is the largest marina in all of Northern Ireland (apparently). And it has all the usual facilities, maintained to a high standard… with berthing charges of around £3.30 per day (full tariffs here). But it is otherwise just a really nice view for the rest of us tourists and plebs to look at. Either way it is very central to Bangor Seafront, and there is a nice promenade path walk, with unobstructed views over the marina, between the two seafront attractions at Eisenhower Pier (east) and Pickie Fun Park (west). It’s about 5-minutes between the two. Otherwise the main Marina building of Bregenz House is exclusive to those without a boat (that I know of) as there’s no real reason to be there. The better views are found along the seafront promenade anyway.

The Eisenhower Pier, named after General Dwight D. Eisenhower, due to a World World connection when a fleet of Allied ships readied to storm the shores of Normandy during D-Day. Although it is still known occasionally as the North Pier in Bangor. So the pier is found just after the Marina buildings of Bangor seafront, and it’s used to berth the larger ships arriving into town, meaning there will occasionally be some rather impressive ships berthed there. Otherwise it’s just a nice stroll, and the black Guillemots (aka the Bangor Penguins) which nest into the walls at the beginning of the pier, are always a charm. Then there’s also the ‘long hole’, a smaller harbour, found at the very start of the Pier with some nice views along the seafront as well as Seacliff Road which runs parallel. Which is a great place to feed seagulls, I guess. Full guide to Eisenhower Pier Here.

At one time (the 1950’s) Pickie Pool, as it was then called was an outdoor swimming pool, was one of the biggest draws for tourism in all of Northern Ireland. But only remnants of this time are now found of this heyday time with Bangor Congregational Church and the remains of the ‘Woman’s Pool’ just past the fun park on the coastal path. As it is now a kid’s play park with all sorts of fun things like putt-putt golf, the Pickie Puffer (a train ride for toddlers), and the iconic Swans of the park (Pedalo Swans). Otherwise there’s little much on for non-children, although the Pickie Cafe has a decent range of eats on offer, from breakfast to closing (09:00AM-18:00PM), with all the usual Northern Irish food favourites on the menu. They also have an ice-cream kiosk during warmer months selling Barry’s famous Lemon Tops which are ice-creams with lemon sorbet slopped on top. Here for our full bit on Pickie Fun Park.

The coastal path leads in both directions from Bangor Seafront where the better walk (IMO) would be from the Pickie Park side of Bangor seafront, where some of the more stand-out attractions include Crawfordburn Country Park, and the more remote beaches between Carnalea and Helen’s Bay. But it also follows the train line towards Belfast City Centre up to the town of Holywood, meaning it’s easier to start or stop at a train station, without needing to double back along the path. Ultimately covering more of the coastline (full guide to Holywood here). Alternatively, leaving Bangor’s Eisenhower Pier, you can continue along past the ‘Long Hole’ to follow a more residential walk along Seacliff Road to reach Ballyholme Beach. And maybe further again to the village of Groomsport (North Down Coastal Path to Groomsport here). You can follow both routes in the videos below.

Where to Park on Bangor Seafront?

Bangor Seafront is rarely busy even at the busiest of times, and there are plenty of car parks and parking spaces to guarantee free parking even during peak seasons and seafront events. And I can say, in hundreds of visits to Bangor Seafront, I have not once paid for parking along the seafront. And pretty much every time I was parked in the central Queen’s Parade Car Park, overlooking the marina, which has 200 spaces as pictured below. Alternatively, Quay Street car park is found at the entrance of the Eisenhower Pier, with a further 132 spaces, and again parking is free. Otherwise, there is the usual streetside and residential parking in nearby streets, however, there will likely be time limitations here so be careful not to be ticketed.

Where to Stay on Bangor Seafront?

A rather massive Premier Inn opened not so long ago in Bangor town centre (opposite the train station), otherwise, almost all hotels are found along the Bangor seafront and coastline. Most of the better hotels are (or have been) along the short stretch of Quay Street, between the McKee Clock and Bangor Eisenhower Pier. Although only 2 hotels now operate here in the Marine Court (current rates here) and the Salty Dog (rates may be here).

Otherwise, it is only really guesthouses at the moment in Bangor, and these are mostly found either on the Seacliff Road, leading along the seafront from the Eisenhower Pier (including the Seacliff Guest House and 30 Seacliff). Or in the opposite direction with the terraced houses behind Pickie Fun Park (Astala Lodge, Pickie Terrace, Shelleven Penthouse, Shelleven Hotel, Ennislare House). Our full article on Bangor Hotels here.