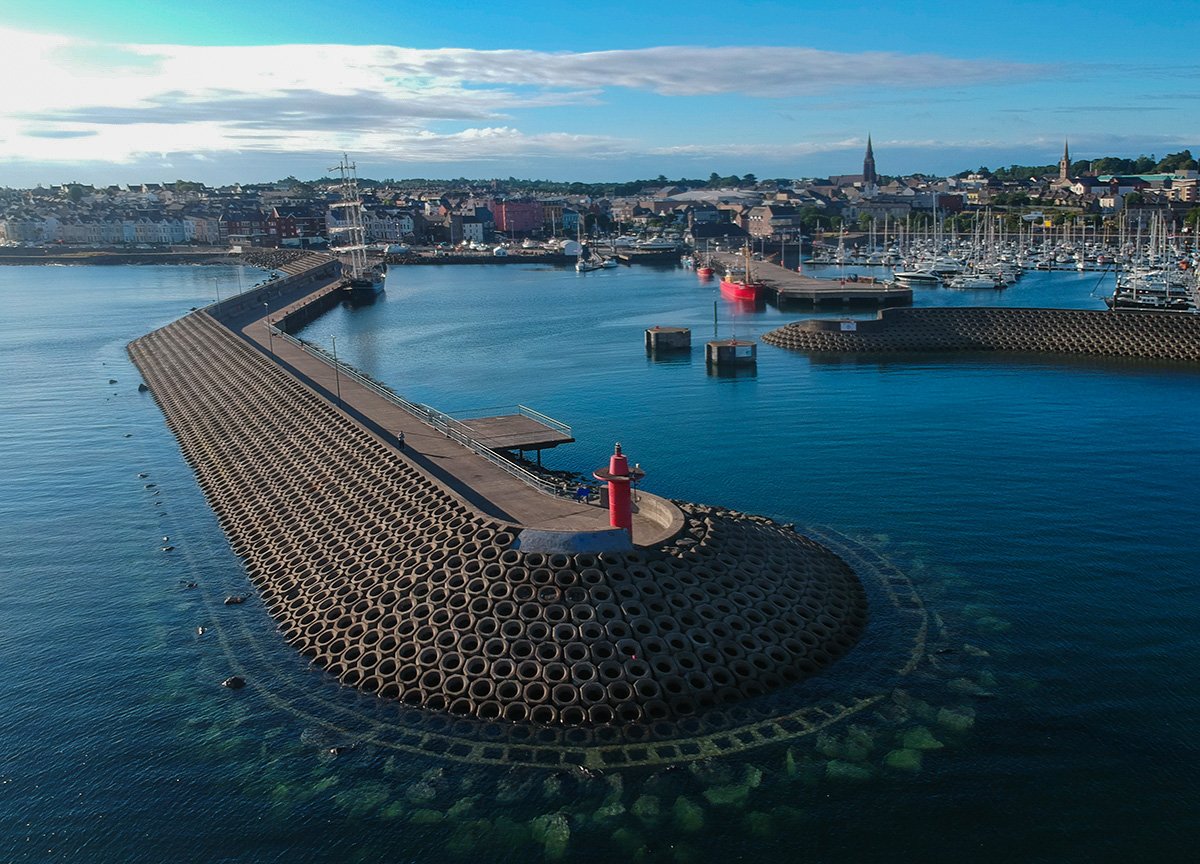 Bangor Pier is officially known these days as the Eisenhower Pier, or occasionally the North Pier by some local folk who really aren’t fussed for change. The pier is located pretty much next to the Bangor Marina, to the north, where there’s a free and not-so-busy car park at the entrance. So it should be easy enough to turn up and find spaces (given there are no major events at the time). The main purpose of Bangor Pier is as a berth place for the larger ships visiting the town, like those that cannot squeeze into Bangor Marina, so occasionally there will be some rather interesting ships docked there.

The Eisenhower Pier is named after General Dwight D. Eisenhower, and former US President, who once inspected a huge gathering of ships (landing ship tanks, gunboats, destroyers and 30,000 soldiers) as they readied to storm the shores of Normandy during Operation Overlord (18-19th May 1944) on the run-up to D-Day (6 June 1944). Hence, the ‘Eisenhower Pier’. However it was originally known as the ‘North Pier’, up until 2005, when it was renamed during an official ceremony with Eisenhower’s Granddaughter Mary Jean Eisenhower. There is also a plaque and a mosaic to commemorate the events found next to the navigation beacon at the end of the pier.

Bangor Pier is relatively quiet at the busiest of times (unless there’s an event in town) so it’s just nice to potter around. Otherwise, the height of excitement tends to be when the big ships come to berth. That being said, there are some bits ‘n’ bobs along the pier, like coin-operated telescopes, that say ’emptied daily’, although ’empty daily’ may be the more likely term. As there’s really not a lot in the distance to look at. Then there are the fishing and coastal boat tours which also are organised from the pier (as well as Pickie Fun Park) by Bangor Boat Tours. Details photographed below. And it also a popular place for fishing although most fisherfolks cast off from the back of the pier, so they’re not slinging hooks over the walkway.

The Pier is also home to some rather flaky black Guillemots (aka the Bangor Penguins), who seem to come and go as they please (actually, they’re migratory). Where they seem to be around from around March through to… actually it doesn’t say on the sign. It just says “March onwards”. But they do seem to stay to at least August, where they lay their eggs mid-May, before sitting on them till mid-June, then they feed their chicks up until near August. Although I am writing this now in mid-August, and I still find them flapping about on the pierside in the mornings. They’re really quite hard to miss as well, where they’re normally found at the beginning of the pier, perched above their boxes/nests which are built into the walls of the pier below.

At the entrance of the pier, right next to the Bangor Lifeboat Station, is a smaller harbour which is known locally as the long hole. And it’s a great place to feed seagulls, maybe, as it’s otherwise not really exciting given the harbour is no longer used to shelter boats. It’s not that long either, and you could to end and back in around 2 minutes. That being said, there are some nice views along the seafront and Seacliff Road, and there is an informative signpost sharing titbits along this coastal stretch. Highlights here include; the old site of the Kingsland rollercoaster, from back in the 1890’s, further up to the Royal Ulster Yacht Club, and then a bit on some suffragette who once lived opposite. As local tourism appear to be clutching at straws.

Feeling peckish? ‘The Guillemot Kitchen Cafe and Winebar’ (their facebook here) is found opposite the carpark to Eisenhower Pier, in what used to be the old ‘Trap and Tackle’ shop from back in the day. But nowadays it is one of the better eating options along the seafront stretch of Bangor, offering options for breakfasts through to dinner, and by the sounds of it there’s a winebar of sorts as well. Although I can only say I have been for breakfast. So it is more of a fancier affair than your typical greasy spoon, quaint and cosy, with a menu of upmarket things like granary breads and smoked salmon that no doubt melts in your mouth. Fun (obvious) fact. The Guillemot was named after the birds nesting on the pier.