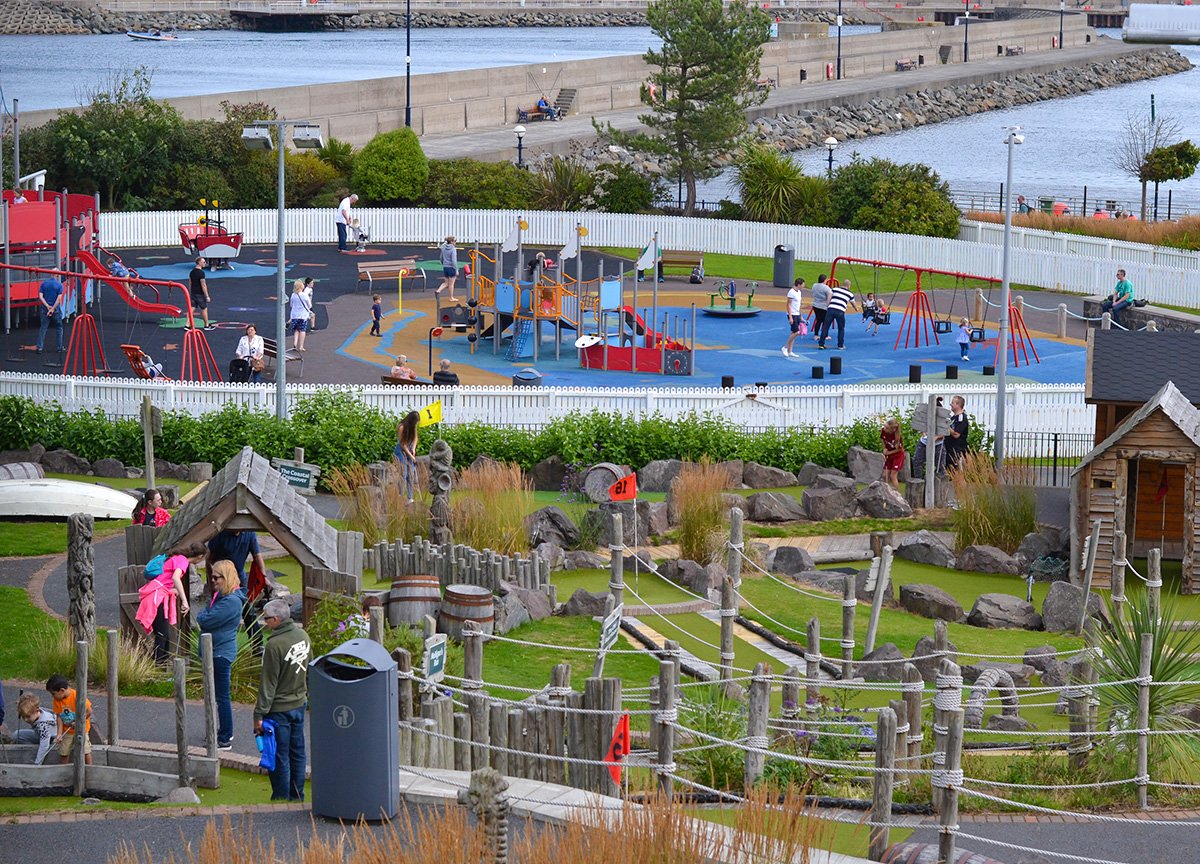 I’ve really only visited Pickie Fun Park in early the mornings, to take photos when it’s empty, as it can be a bit creepy for an adult to photograph in a kid’s play park. Regardless of how juvenile I am. Otherwise there’s not a whole lot to offer at Pickie Fun Park for sober adults, although, the swans and maybe putt-putt golf could be fun when drunk. So I managed to sneak in to photograph Pickie Fun Park while catching up with my favourite sculpture ever, the Pastie Supper Lover, who is more or less a guy eating a pastie. Anyway, for those visiting Pickie Fun Park, parking can be found next to the park itself, although spaces are both limited and awkwardly accessed via the backstreets of nearby Gray’s Hill and Princetown Road. Otherwise, the main seafront car park (Queen’s Parade) is just a minute’s walk along the seafront promenade.

I did snap a few less intrusive shots during a Pokemon Go community event at Pickie Fun Park, as the area is probably the busiest hub for Pokemon players in all of Bangor (I also bagged some shiny Evees). And the park at the time was probably at its busiest, given it was a sunny weekend, in the summer months of Bangor. So there were some added attractions on the day, such as Zorb Water Balls, and an outdoor barbecue grill. And it was otherwise business as usual for the main attractions in the park, which include highlights such as the Pickie Puffer (a toddler’s train track), Disco Ducks (I dunno), a putt-putt golf course, and the somewhat iconic Swans of the park (Pedalo Swans). Anyway, if you need a distraction for the kids, Pickie Fun Park opens 09:00AM – 21:00PM daily through Spring and Summer. Then it opens on varying dates through the rest of the year.

Hankering for some munch? Then why not grab a bite at the Pickie Cafe? Anyway, I found myself passing Pickie Fun Park a lot this summer, in the early morning hours, when the park is empty apart from the remote control boat enthusiasts who sail their boats in the swan pond. And so I thought I would call in for a quick breakfast at the Pickie Cafe one morning, to be pleasantly surprised by the range of eats on offer through the day. But not so much by the prices (it was around £7 for the fry) and the weird transparent pink theme going through the interiors. Although they do offer decent portions tbf, and the menu includes all the Northern Irish food favourites from local cafe menus, and the chip shops and pub grub. Also, check out the ice-cream kiosk selling Barry’s famous Lemon Tops, which more or less are cones of ice-cream, with a dollop of lemon sorbet on top. Anyway, the Pickie Cafe opens daily between 09:00AM-18:00PM.

Pickie Fun Park was built on what once was an outdoor swimming arena (Pickie Pool), which really is a bit nuts in Bangor, considering the ‘Baltic’ temperatures around here. Yet Pickie Pool was one of the biggest tourist draws in Northern Ireland at one time (1950’s), alongside Barry’s Amusement Park which was found nearer the north side of the seafront. But international travel pretty much killed off any domestic tourism that existed at the time. However there are still remnants found from Bangor’s heyday; including the Bangor Congregational Church next to Pickie Fun Park (below left), as well as the remains of the ‘Woman’s Pool’ (below right) which is found by a short walk along the coastal path. Exhibitions and nostalgic memorabilia can also be found at the Bangor Museum.