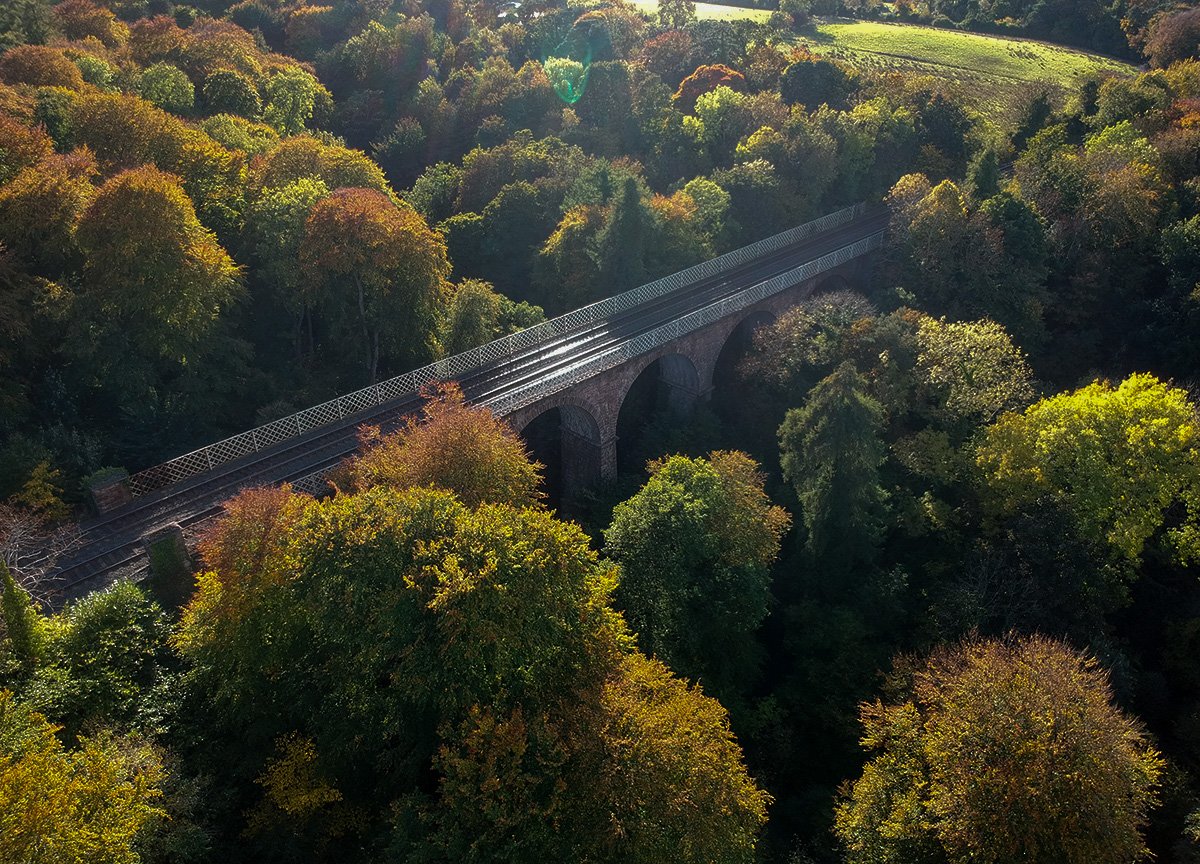 Until recently, it was a good 15-20 years since I last explored the forests of Crawfordsburn Country Park. At least, I hadn’t really seen past the visitor centre and the perimeter trees of Crawfordsburn Beach. But through the last year, I have been adventuring more as I follow the changing colours into the Autumn, as again I realised what a fantastic attraction we have right here on our doorstep in Bangor.

This was confirmed by Fanfan (from Thailand) when I brought her for her first visit to Crawfordsburn Forest Park when she describes it as “magical” and makes comparisons with “Narnia” and “Harry Potter” and complains “why have you never brought me here before”. Although I kind of have, or I had at least hurried her through to Crawfordsburn Beach thinking that someone from Thailand (a country with some of the most idyllic beaches) would be interested in the breezy shores of Northern Ireland.

The Waterfall Trail and Crawfordsburn Viaduct

I brought my drone for video coverage around the forest park recently, and to try and capture the Bangor-Belfast train (Gold Coast Trainline) that passes above along the Crawfordsburn viaduct (in the video above). At the time I had accessed the country park from the small village of Crawfordsburn, where a small lane leads down from the Old Inn Crawfordsburn Hotel, and past the ‘Waterfall’ on the waterfall trail. One of the various waymarked trails in Crawfordsburn Country park.

This is the best part of the forest to explore, where winding tracks and tiered climbs follow the river passing through Crawfordsburn Country Park. It isn’t far to then find the Crawfordsburn viaduct, an elevated train track that towers into the canopies of the forest park, and just looks fascinating from beneath. Then it’s just a scenic woodland walk towards the coastline (again, watch the video above).

Alternatively, to access the same area, it’s easily found from the first clearing and kerbside parking from the main entrance gate of Crawfordsburn Country Park. Just after the small tunnel train bridge.

So the Visitor Centre is worthwhile if new to coastal life in Northern Ireland (or have kids), with lots of exhibitions and educational displays about the creatures and critters of the forests, and the marine life of the rock pools and the sea. For locals as well, there are nostalgic photos and historical stories of local life from nearby settlements e.g. Crawfordsburn Village and the Crawfordsburh Viaduct. It is interesting and maybe exciting for some.

Inside the Crawfordsburn Country Park Visitor Centre is the Woodland Cafe, a small restaurant and cafe which serves food from breakfast in the morning, including Ulster Fries etc, through to lunch with a canteen-style menu and carvery (check here for our Northern Irish food guide). Although we would normally just go for a coffee and some tray bakes.

Crawfordsburn Beach is probably the best sand beach along this coastline, it has been awarded (and lost) the Blue Flag for excellence, but it still retains its prestigious Seaside Award (UK) which ensures visitors “a clean, safe, attractive and well-managed beach” along with the maintained facilities etc. But not overly glamourous (it’s Northern Ireland). It is also relatively untouched and quiet throughout the year beyond local walkers, joggers, and dog walkers. But when it comes to the sunny summer days of the year, and during holidays and when the schools are out, the beach becomes packed with visitors from Bangor, Belfast, and beyond.

There is more to this nearby coastline than Crawfordsburn Beach, as Crawfordsburn Country Park sits fairly central on the North Down Coastal Path from Bangor to Holywood, and it’s just a short walk to other nearby beaches and attractions (in both directions). A right turn, my preferred route towards Bangor, where it’s just a stone’s throw to the old boathouse and beach at Swinley Bay (pictured below). Then a left turn leads to Helen’s Bay Beach and the old World War military station at Grey Point Fort. Attractions that are actually part of (or connected to) the wider Crawfordsburn Country Park.

The North Down Coastal Path

Crawfordsburn Country Park is in fact much larger than what many locals know of, as it incorporates areas of Helen’s Bay, and runs up to around 500-metres or so past Grey Point Fort, around where the coastal path reaches the old stone boathouse towards Seahill. Although I probably wouldn’t bother following this far unless you’re a keen walker.

However, there is a handy route for those travelling to Crawfordsburn Country Park by train via the coastal village of Helen’s Bay (train station found here), which I highlight in the “How to Get to Crawfordsburn Country Park” at the bottom. This route is also a part of the Bayburn Trail, which I plan to share in its entirety soon enough, but it more or less takes in the less scenic main roads, and ultimately it loops away from the forest parks and coastlines. As a loop.

Here we show the entire length of the Crawfordsburn Country Park coastal walk in the video below (1:35 to 2:42) including Helen’s Bay and Grey Point fort as a section of the wider North Down Coastal Path between Bangor and Helen’s Bay.

How to get to Crawfordsburn Country Park?

How to get to Crawfordsburn Country Park from Bangor?

By Bus from Bangor: The most direct route from central Bangor to Crawfordsburn Country Park would be by bus (Bangor – Holywood – Belfast) with buses leaving every hour or two from the main station and stopping in the centre of Crawfordsburn Village next to the Old Inn Crawfordsburn Hotel.

Alternatively, for the more adventurous, continue one-stop to Carnalea Train Station (Carnalea station found here), with a more scenic coastal path route past Swinely Bay. Or just walk from Bangor itself (but it’s a fair trek).

How to get to Crawfordsburn Country Park from Belfast?

Travelling from Belfast to Crawfordsburn Country Park is similar to Bangor (above) only travelling in the opposite direction. The simple directions below: